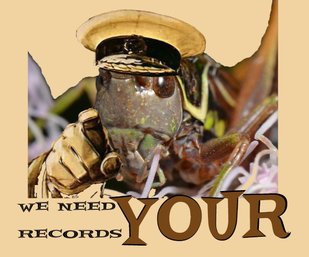 We are still gathering


information for the planned


so don't forget to send in your records.

2014 is the last year of recording for this atlas so please check out your local Worcestershire patch and let us know what you find.

2014 was a year of mixed fortunes for our Orthoptera and allied insects; some species continue to spread while others appear to be in decline.
A few highlights (and low lights) follow: 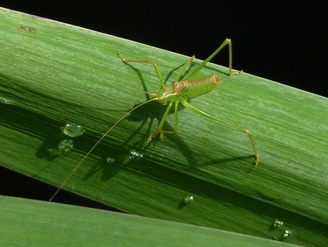 Des Jenning took this terrific picture of a Speckled Bush-cricket earlier in the summer at Upton Warren.  This is certainly a species on the increase.  Some records will be the result of better knowledge of where and how to look but there have been sightings of this species across most of the county now.
It is often more obvious in spring when the early instars sit quite openly on vegetation.  As they mature they move further into cover, especially nettles and brambles making them very hard to find.
A bat detector is useful but the call of Speckled Bush-cricket is easily missed even on such a device.  A sweep net is also useful for nettle patches but obviously not much use in bramble. 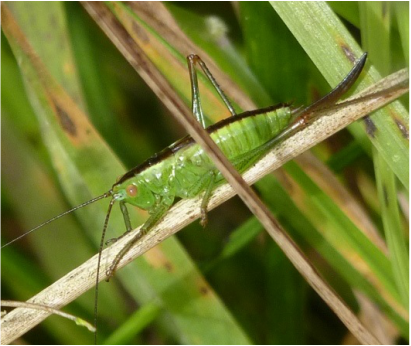 Another one from Des Jennings; this immature Short-winged Conehead proves that the species continues to breed at the site at Fox Hollies near Birmingham.
Short-winged Conehead still appears to be reliant on large patches of rushes (Juncus sp.) but this colony is in rushes mixed in with tussock grasses rather than in good wetland sites.
This species was also found at a new site this year; an Orthoptera identification day was held at Avon Meadows in Pershore and it proved to be an excellent site for lots of species including Short-winged Conehead.
They are very similar to Long-winged Coneheads but the ovipositor is upturned in Short-winged Coneheads as the picture shows.  Males are best identified when mature. 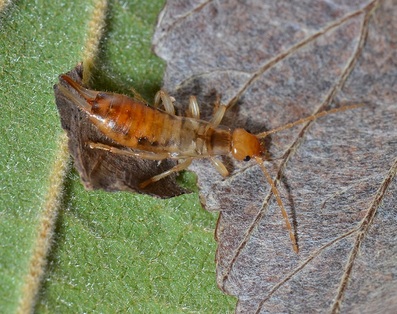 Lesne's Earwig has been found at a few new sites in the Avon valley this year.  including several sites owned by Vale Landscape Heritage Trust  http://valetrust.weebly.com/wildlife.html  And I suspect that this handsome earwig could be found anywhere along the river where habitat allows.  Interestingly, it has still not been found in Warwickshire.
The wild clematis Old-man's-beard is still the key to finding the species, as long as it is in old hedges with good connecting routes as Lesne's Earwig is flightless and so is a good indicator of connected habitats.
It was also found at the southern borders of Worcestershire in 2014, near Longdon Marsh where there are miles of Elm hedges.  In that situation the usual association with the clematis is replaced by the Elm.
The most intriguing record came from the church car park near Grafton Wood NR.  A freshly moulted individual was picked up under an Alder tree during a heavy rain shower.  Had it been washed out of the tree or did it get transported to the car park by other means?  Further searching in that area is needed.

Have you seen a Common Green?

The hot weather has allowed the continued spread of some species; including the Meadow Grasshopper which is having the best summer for many years,  But the Common Green Grasshopper is disappearing from the countryside.  This species usually starts to sing in June, ahead of the other grasshoppers but this year it is very late and appears to have gone from many sites.  Its decline has been reported on this site in the past but this year it has only been reported from two sites so far; Pound Green Common on the Worcestershire/Shropshire border and North Littleton near Evesham.  Is this species just very late to mature this year or are we seeing a species in serious decline?

A male Great Green Bush-cricket was reported from the south of Worcestershire in July 2014.  This species has been reported on a few occasions over the years but it has not been possible to verify any of the reports.  At best it is thought that the species may be a very occasional migrant in to the county.  Most records are more likely mis-identifications (confusion with Oak Bush-cricket is common).
However the site and source of the latest report makes it possible that this could be a new breeding species for the county.  Further investigation will take place so watch this space..... 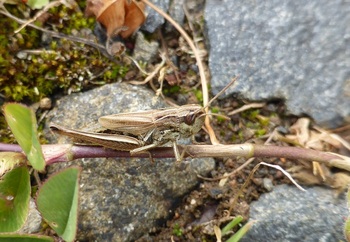 The 2014 Cricket Season has started in Worcestershire.

Early instar Roesels Bush-crickets were found at Hipton hill in the Lenches 30th May 2014.  Several individuals were found around the site.  There was also a very recently hatched first instar and Conehead.  Going by the habitat of mixed, tall vegetation it was almost certainly Long-winged Conehead. Short-winged are still confined to wetlands or large patches of rushes within grassland in Worcestershire.  An unidentified first instar grasshopper was also found.
Oak, Dark and Speckled Bush-crickets were all present in Tiddesley Wood Nature Reserve on 4th and 5th of May 2014.  This marks a return to the 'normal' emergence time, following last year's late start.  Let's hope the grasshoppers survived the flooding as their eggs are laid on or in the ground.

Is the House Cricket extinct in Worcestershire? NO it's not!

Many people can remember the House Cricket (Acheta domesticus) being present in homes and basements of large buildings, including hospitals.  After a couple of decades of pesticides such as DDT the species all but died out with the most recent record to come from a domestic dwelling being 2003.  I have tried pest controlers to see if they get reports now a days without success.  Even suppliers of insects for reptile food do not use Acheta domesticus anymore.  I even tried Stratford Butterfly Farm (Warwickshire) to see if I could obtain any House Crickets to photograph but they were unable to track any down.  So it does appear that the House Cricket is now extinct in the county (and beyond); unless you know different......
A self-sustaining population has now been reported from buildings at a site near Bewdley so are they anywhere else in the county? 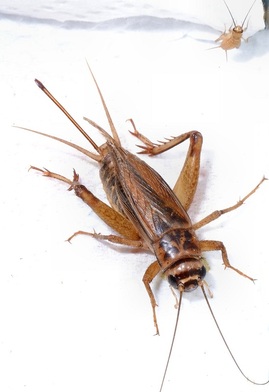 Groundhoppers emerged at the end of March 2014