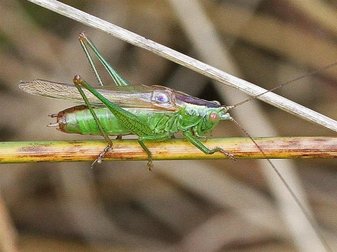 Male Long-winged Conehead, macropterous form copyright M. Foley
Both male and female Long-winged Coneheads were photgraphed on the green adjacent to Monk Wood Nature Reserve on 18th September.  Amongst the photos were extra long-winged (macropterous) forms of both a male and female.  This could mean that the species will be pushing further north and west.
Nymphs were also present at the site, which is not unusual with this species unlike the other bushcrickets.  But are these youngsters the result of late hatching or are they a partial second brood? 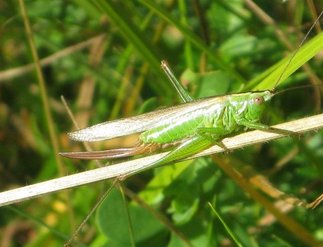 Watch out for the bathroom bushcricket 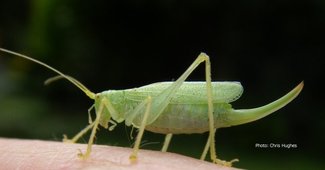 Female Oak Bushcricket, copyright C. Hughes
Oak Bushcrickets are known to enter buildings, drawn to light at night.  This year is no exception and with resonable temperatures during the late summer they have been reported from several houses already.  This species can persist into November so there's still time to get a few more records.

Short-winged Conehead, first for the year and a new site 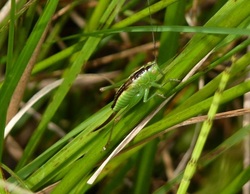 Short-winged Conehead at Fox Hollies Park. Copyright D. Jennings
Short-winged Coneheads are still fairly uncommon in the area so it is always good to get records from new sites.  Sub-adult coneheads have been found at Fox Hollies Park just inside VC37.  This is the first record of the species this year and a new site.  The fact that the cricket photographed was a nymph obviously means that they must have been there last year to breed, showing how easily over-looked this species is.
The habitat is also interesting; areas of rushes and horse-tail within dry grassland.  So could the Short-winged Conehead be getting less fussy about habitat in the county and starting to spread??

Common Groundhoppers out at last 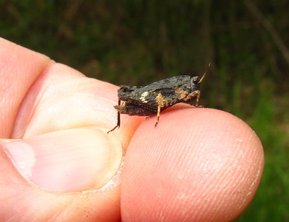 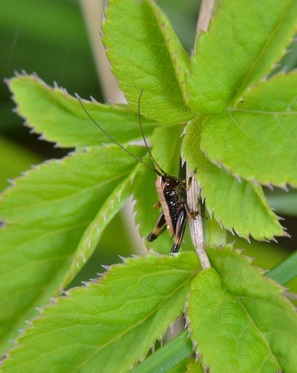 Not much bigger than an aphid at the moment but look in sheltered woodland rides around the county and you should find them now. 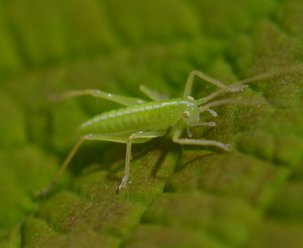 Oak Bushcricket second/third instar: Wyre Forest 15.06.13
The Wyre Forest Study Group recorded the first Oak Bushcricket nymph of the year for Worcestershire on 15th June.  This second or third instar was found in an area of heath under an oak following a heavy rain shower.
Common Groundhoppers were also present. 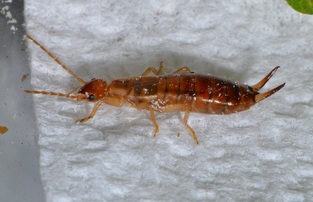 Lesne's Earwig (female) Evesham Country Park 21.06.13
A total of seven adult Lesne's Earwigs were swept from low vegetation at Evesham Country Park along the river walk on 21st June.  They were in vegetation close to Old-man's Beard (their preferred host during the late summer/autumn) with tussock grasses and Hogweed.  Interestingly they were all females; is this usually the case at this time of year?  There were many immature earwigs present but these were not identified to species although some have been taken to 'grow on' to check identification later.
There were also may Dark and Speckled Bushcricket nymphs present. 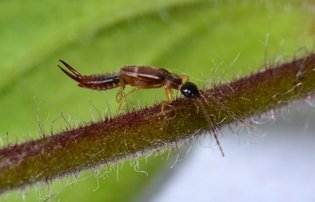 Lesser Earwig on Red Campion 26.06.13
Lesser Earwigs are associated with compost heaps and manure heaps so it was a surprise to have one reported from Red Campion in a garden in Redditch.
This tiny earwig is almost certainly more common than records suggest so check around your garden compost bin.  It closely resembles a small Staphilinid or Rove beetle, but on close inspection has typical earwig cerci (pincers). 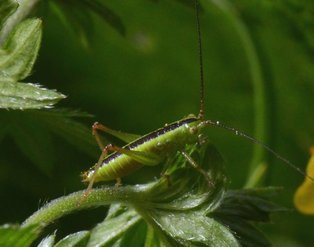 Long-winged Conehead early instar at Trench Wood 14.07.13
Several early instar Long-winged Coneheads were found in the main glade at Trench wood 14th July 2013.  They were in an area with a variety of grasses, sedges and rushes as well as various flowering plants such as Tormentil and Betony.
It is still safe to say that any conehead nymphs found away from good wetland sites in the county are Long-winged.
There were also Speckled and Dark Bushcrickets, Meadow Grasshoppers and Common Groundhoppers present. 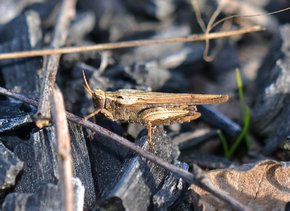