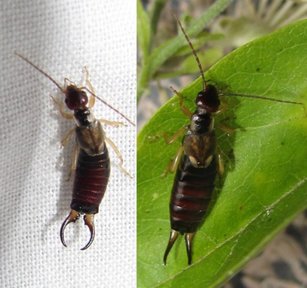 male (left) _____ female (right)
Ubiquitous.  There shouldn't be a white patch anywhere on the distribution map but it probably suffers from the same reason for under recording as other common insects "someone else will have recorded it there".  This is often not the case so please send in records for all areas where you find this species.  It is both the gardener's friend and foe, being omnivorous it feeds on small garden pests but also enjoys certain flower blooms.
There have been many studies highlighting their exceptional parental behavior but the family life of the following species is somewhat more of a mystery. 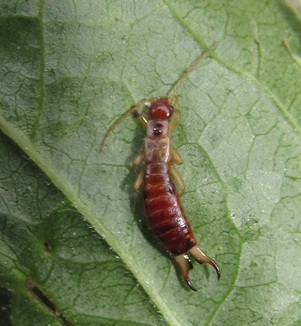 This is a rare insect in Worcestershire, confined to old hedgerows with abundant Old Man's Beard (Traveller's Joy, Clematis vitalba).  It is a wingless species so intact old hedgerows are vital for it to spread.
The best way to find this species is to beat or shake the Clematis into an upturned umbrella or a purpose made beating net or similar.  September and October seem to be the best months for this, there will be lots of other invertebrates in this habitat including other earwigs and bushcrickets.
It might be worth trying other climing plants such as Ivy and Hops. 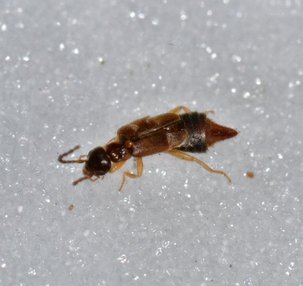 Uncommon and certainly under-recorded in the county.  This is a very small earwig resembling a small Staphilinid beetle (rove beetle).
Its preferred habitat is dung heaps and compost heaps; this combined with its small size makes it no surprise that there are so few records for the county.  It is occassionally drawn to light however so may turn up in moth traps. 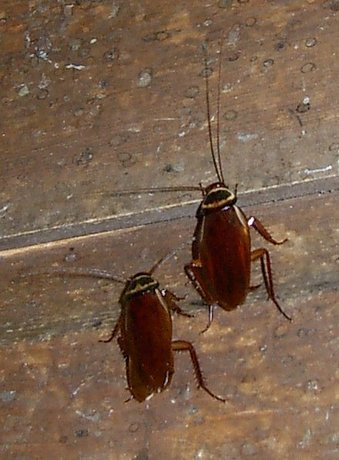 Australian Cockroach (Periplaneta australasiae)
There are no native cockroaches in Worcestershire but four introduced species have been recorded.

The distribution maps show only a few records for any of the species, some of  which are undoubtedly more widespread than the maps suggest.